In a certain way I was forced into making 'vice' by societal changes. In the past my raw materials were readily available from the surrounding environment. There wasn't a place in the world where it was not possible to roam the countryside and gather scrap steel; detritus of human occupation.

In Tobago, steel water tanks dotted the landscape, toppled over by their owners with the advent of plastic ones. These six foot cubes of steel became the materials out of which I made 'papa bois' and his collection of companions. In Antigua, very hot afternoons were spent hacking through thorny cassie bushes to access old construction machines, rotting in the forest invisibly like wartime waste. I would lug my torch into this graveyard, and, like an ant, cut carryable pieces off to transport back to my studio to make sculptures. In Colorado, it was a particular scrapyard that was my pasture. Located in the center of the city, it was a dreamy 'alice in wonderland' place, devoid of people but populated by heaps of scrap steel; helicopter rotors, school desks, sunflowers and rabbits. A ton of steel, gathered then, cost 125 dollars. It's ten times that now.
Steel, in all its variations, has become a precious commodity. It's turned small bands of people like me into armies of ants. The environment has been picked clean of old steel; new lead roofs of churches are stolen, stripped to be resold before the scaffolding comes down. Newly built infrastructure in struggling countries, especially copper, is immediately raped to sell to developing economies. When I was in Spain recently a stolen Chillida sculpture almost earned its purveyors 40 euros at the scrapyard! The yard owner recognized the sculpture as part of the Spanish national treasure and alerted the authorities. Throughout history however, better sculptures have been pawned for less.
In Wales, farmers sit on raw materials I would kill to sink my teeth and torch into but now won't part with them. They're not Doing anything with the steel; they just know it's valuable. But as an artist you must create, even within a seeming vacuum. You'll find anything to work and adjust to your satisfaction. Marble, marbles, clay, driftwood, or metal. The least expensive steel these days are the chunks that have already been formed into functional items that, for some reason, have lost their value due to their lack of present functionality. If taken at weight value, these objects would be considered very valuable, but for some reason, a defunct functionality renders them useless, and therefore cheap.

The vise was purchased at a local farmers auction for 4 quid, ten times less than it's value in steel by weight. Not being able to come into possession of steel by collecting, foraging, scavenging, I bought it. Though I was certain I didn't need already formed steel in the shape of a vise that didn't work, I was happy to rest it in the garden and watch.  I watched for 2 years how the air and weather stripped it of its black enamel. I tended it, each time it fell off its precarious perch on the edge of a stone wall. I even apologized for it when it nearly broke the leg of Mack while we were digging out the garden.

And eventually a moment comes. Inspiration. Hopefully we've conditioned ourselves to recognize it, and are prepared to execute immediately upon it and just get stuck in. So it was quickly taken down and propped upright. I have said somewhere before that sometimes sculpture is nothing more that a nice shape propped upright...Propped Up Right.

This piece would be an attempt to illustrate this. In considering the farrier's tool, my gut didn't want to work it as I had previous raw material, that is, considering it clay and carving it; investigating it as liquid. This steel already had a most beautiful form, my job was simply to make it speak...more.

I did know that I wanted to express the idea of recursiveness with it, and some time was spent considering the object in order to explore this. The vise consuming itself. The real work was in developing the relationship between the 'arm' and the 'jaw' of the vice.  Because the piece is hefty, tough, industrial, I was aiming for delicacy with regard to its 'self consumption'. I felt that if the vice was actually chomping down on its own arm the idea becomes to literal, too violent, too obvious. This negative image hopefully helps to better visualize this 'problem', as I put it to myself. The arm and its relation to the 'bottle' shape of the negative space between the uprights of the vice.

It's the snake eating its tail

Or a child eating PEZ

When the vise (vice) was somewhat 'finished' I start to take pictures. Photos are an important way to communicate, not only with others, but often with ourselves. They can be invaluable to an artist as a way of seeing through a different set of eyes; seeing what the camera sees. While taking pictures of 'vice' something weird happens; I see something more. Revealed like a cloud formation, I felt as if God itself was laughing at me; 'all this time you didn't know what I am?'

Standing above it looking through the lens

Present all the time, or amplified by my efforts?

No telling, but there all the same

We make our own luck

While renovating my cottage over the last couple of years I have been living with my sculptures; staring at them, moving them, reconsidering them, re-purposing them (through necessity or through play) and many pieces that were once individual sculptures have gravitated towards others over time and are now part of ensembles. The Ouroboros vise has been a constant source of entertainment and riddle for me. It has been one of my favorite pieces to have around. It has been used at one time or another to pound upon, dry laundry, as a lampost and as a weight for laminating wood. Eventually it found its way onto a pedestal at a height which I had always intended it. And there it stayed. Though the face it contains is no longer discernible unless one were to stand on a ladder- I like that idea.

Somehow, at some point, gradually, the ffreyes cow ended up married to it and once this happened I couldn't separate them. To me they speak the same language.

The ffreyes cow was the first in what became a large series of palm sized cows based upon the same idea. Simply, that they eat. That's what they do. And in this role they themselves are recursive, reciprocal loops. They eat grass, pass that grass back to the grass, and are nourished again by that grass. A cow is a perfect example of a cycle. I've seen how cows have been represented in art and I never quite got it. I know why artists portray (pastoral) cows the way they do- with their heads up, looking like dumb, silly, cute beasts, maybe with a bell dangling- it's because that's what a cow does when somebody approaches. And this is all the person sees, the reflection of his/her own influence upon the scene. But generally cows don't stand like that. Most of their time is spent thus: 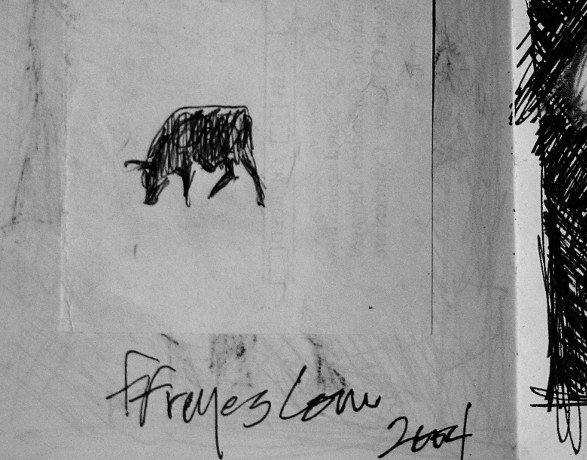 I was lost for ideas in my shack studio

Went outside to walk around

Realized the cow was very efficient

And would only move a leg when absolutely necessary

Sat on ffreyes beach, Antigua, and sketched it

The two sculptures are beautifully balanced as individual pieces. As individual pieces they exhibit nice proportions, color, capture good light and have interesting textures. Together, they speak the same language. The idea that I was expressing in the little cow is also expressed in the big brutal industrial tool. Together, scale becomes the real player, and lends a whole new meaning to the piece.

But the ouroboros is big and powerful

And you just know that at some point, it will eat that little cow too

This piece ended up becoming a part of a larger picture, a larger study

They all just kind of fell together at the same time

And hopefully together more powerfully express a commentary

A familiar sentiment that has echoed through the ages

'the Individual' is one of my most successful and favorite sculptures. I love the way the eyes continually scan vertically, up and down, cyclically, while looking at it;  the brain slowly comprehending the commentary and filling up even more, unseen and unintended, baskets of understanding. I love its simplicity, and complexity. I love it's pockets of isolated energy.

I like the fact that there is no way I could have thought it up from scratch.

I also see how it typifies an aspect of Wales, the environment in which it was born. Wales is a very beautiful place, but also, similar to many countries today, somewhat- idle. The reality of Wales is one of postcard scenes of 'welsh black' cows and bleachy white sheep lazily grazing a pastoral, fiery green environment, while a large segment of the human youth struggles with drug addiction for the lack of anything to do, a large percentage of the population on the dole, and a dreary grimness pervading many neighborhoods. John Cale (of the Velvet Underground, he's Welsh) recently made a very powerful documentary with regards to the issue. This is the reality and dichotomy of the Wales I observe and contemplate. And it is the reality of many modern societies. This sculpture will, for me, always be rooted to that foundation. But, more importantly, it is the artists commentary on all of us, outside of any microcosmic contexts, consuming on industrial scales, looming over the simpler things in life; an illustration of one burden that 'developed' societies have placed upon the individual. Pertinence is an Imperative of Art.